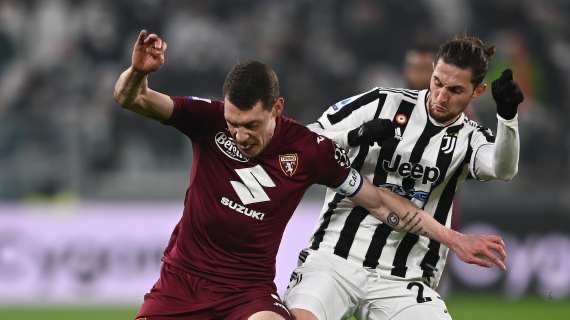 Juventus faced Torino in matchday 26 for the second ‘Derby della Mole’ of the season. That ended up in a disappointing draw, 1-1 for the Bianconeri. Matthijs de Ligt opened the scoring for the Old lady in the 13th minute of the first half. While Andrea Belotti equalized for our city rivals in the second half. Although a frustrating night, here are the 5 Major Talking points from the Derby, explained by two of our writers.

Matthijs de Ligt loves to turn up big in the Derby

De Ligt’s debut goal for Juventus came on 3 November 2019 in a 1-0 away win against Torino. And yesterday as well, the Dutch wall scored a sensational header to put us ahead in the first half. Apart from the goal, de Ligt made 12 total clearances, 2 interceptions, 4 recoveries and had a pass accuracy of 81%. As usual the young defender had a brilliant game. It’s no secret, that Matthijs staying at the club for the seasons to come would be in the best interest of the club.

Alex Sandro as Centre back

Daniele Rugani was named in the starting line up but Luca Pellegrini replaced him before the match after the former player had problems during the warm up. This forced Alex Sandro to play as Centre back. Overall the player had an average match. The Brazilian left back recorded 4 clearances and 4 recoveries.

Mattia de Sciglio replaced Luca Pellegrini in the 46th minute of the game after Luca felt some discomfort in the left knee. Reports suggest it was a bruised knee for the Italian.

Paulo Dybala was also replaced by Weston McKennie in the 53rd minute of the game after getting injured. As reported by Romeo Agresti, ‘Dybala felt muscle hardening in the flexor, there is a feeling that he stopped in time’.Hopefully the Argentine would be available for the Tuesday game again Villareal.

After a frustrating draw against the city rivals Torino, the next challenge for Juventus is to face Villarreal in an away Fixture of Uefa Champions League on the coming Tuesday. To some extent, we can draw a comparison between the Torino FC and Unai Emery’s Villarreal. Under Juric, Torino looks more rock solid while defending against the big teams. Although Villarreal is more fluid while attacking, they are also known to play “low block” against some big teams like Manchester United in Europa League Final last season. Allegri has got a hands on experience of what to expect in the Champions League fixture. Now, he has roughly 3 days to sort out the attacking output as Emery’s Yellow submarines will be a tough nut to crack.

Huge influx of fans before the Derby

Last but definitely not the least, it was a treat for the eyes to see Bianconeris coming in huge numbers to the stadium. Even though FIGC announced yesterday that the stadium capacity will be increased to 75% starting this weekend, Juventus game was still restricted to 50% capacity because it was a last minute decision. On the brighter side, Juventus announced that all the tickets available for the derby game were sold out few hours before the game. The J Hotel saw the same influx as all the 105 rooms of the hotel were booked, mostly by the fans who visited the city for the game. The Derby effect.