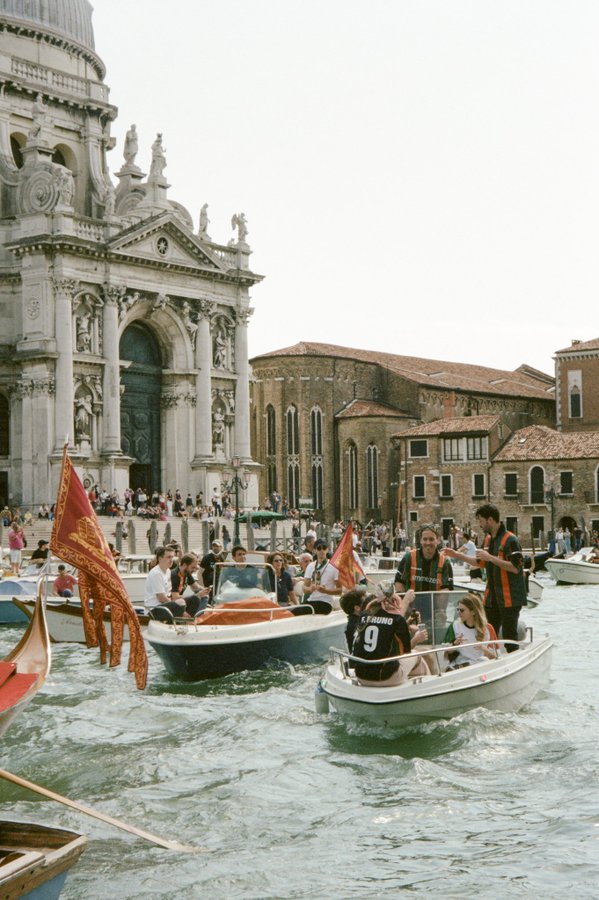 Soaked in rich history and culture, Venezia (or simply Venice) is indeed one of the most unique cities in the world. Globally renowned for its architectural grandeur and distinct waterways, the Italian city is not normally associated with its football club. However, after its three bankruptcies in 10 years – each leading to re-entrance to Italian football’s 4th tier division (Serie D) – that could all be about to change.

This is the untold story of Venezia FC!

Promoted back to Serie A following a 19-year absence, Venezia FC is on the rise following a “stormy” period in the club’s history. Their 10 men heroically held on in last season’s play-off final second-leg against Cittadella, before a 93rd-minute goal sealed the victory and triggered scenes of exuberance among the players and staff at the Pier Luigi Penzo Stadium, little more than a mile from the city’s iconic Piazza San Marco. Those scenes were somewhat transcended as the players, joined by a parade of boats and waved on from the bridges as supporters showed their gratitude on both land and water, took to the city’s canals in a unique celebration of their achievement. Yes, you heard that right, a boat parade. Whenever a club wins a title, they celebrate it on an open-top bus. In Venice, the scenario is a bit different. They do it on a gandola, a kind of a boat!

Normally, this would not make particularly head-turning news. Nevertheless, Venezia are far from an ordinary team, not just because they play in a city that is far from synonymous with a sport (Can you even imagine a football stadium inside Venice?), but because in recent years, they’ve risen from bankruptcy to become one of the coolest cult teams of the beautiful game.

Venezia FC was founded in 1907 in Venice by about 20 enthusiasts through the merger of the football sections of two Venetian sports clubs. The 1940s can be considered as the ‘Golden Era’ of the club as they finished 3rd in Serie A (which still remains Venezia’s best-ever result in Serie A) in 1941-42 season and won Coppa Italia the next season, their only major trophy to this date. Since then, ‘The Winged Lions’ have spent much of their history bouncing between Italy’s top two soccer divisions(Serie A & Serie B). But disaster struck around the term of the millennium as the club became desperately short of funds. In 2002, the manager left, taking his entire coaching staff and, in an extraordinary move, 12 players with him, to Palermo.

Two years later, the club declared bankruptcy. Twice in the decade that followed, the club was re-founded, and twice again, it went bankrupt. The club would have to start again in the fourth tier in 2005, 2009 and 2015 as it wobbled on the brink of a financial crisis. Yet, following the third bankruptcy in a decade, Venezia FC, as we know it today, was born. Its rebirth would pave the way for three promotions in six seasons. Rescued by ambitious American investor Joe Tacopina, whose blockbuster appointment of former AC Milan legend Filippo Inzaghi as manager secured successive promotions to Serie B, the club completed its recovery under the guidance of current president and former New York Stock Exchange chief Duncan Niederauer.

Venezia’s home ground Stadio Penzo is also one of its kind. Taking its name from World War I hero and Italian Pilot Pier Luigi Penzo, the stadium alludes to the difficult journey the club has endured reaching Serie A. First opened in 1913, Stadio Penzo is the second-oldest stadium in Italy, after Genoa’s Stadio Luigi Ferraris. Once having a capacity of more than 25000, it was reduced to a little over 7000 as an infamous tornado hit Venice and caused extensive damage to the stadium in 1970, making it the smallest stadium in Serie A by some distance.

What makes this stadium even more beautiful is the fact that the stadium is surrounded by water on two sides and is mainly accessible by boat. Since most of the Venezian staff and players live on the mainland, they have to park their cars up and have to get a big team boat all the way around Venice in order to reach the stadium. The other way to reach the stadium is by a walk through the famous city, which attracts in excess of 25 million tourists during a normal year. That also hints at Venezia’s potential as a global brand.

For the citizens of Venice, this promotion means more than just watching your local club playing in a top tier league. It will also help in restoring the identity of the city as a whole. Water levels of the canals are rising at an alarming rate because of global warming. Many aquatic species of the lagoon that surrounds the city are on the verge of extinction. Since activities like agriculture and mining are impossible in the area, Venetians have to mainly rely on the tourism industry as the source of income. The global outbreak of coronavirus has been pretty harsh on the tourism industry and has made the situation even worse. Hence, a lot of residents are leaving the city in search of a better job. Matters like these are often overlooked by the local authorities.

Yet, with the team achieving a promotion, things are improving. Venezia FC has now become one of the most talked-about topics in Europe. Indeed, there is no greater example of the club’s growing appeal than its latest collection of stylish home and away kits selling out within hours of their release. A lot of big media houses have also started covering the current situation of the city, drawing the attention of many investors and environmental activists. Many NGOs have come upfront and have started projects for conserving the aquatic life of the lagoons. Recently, even the government of Italy has declared the city’s lagoon a national monument and has officially banned large cruise ships from entering Venice’s waters. Indeed, Football is more than just a game.

The 2021 season may be the most important in Venezia FC’s history. Their first objective will be to stay in the league as long as they can and keep supporting the Venetian community. Venezia recently defeated Empoli, scoring a goal in Serie A after 19 years. With the inclusion of MLS star Busio and Ethan Empadu (from Chelsea), their squad looks more stable than ever. Venezia is currently 14th in the table and will face Spezia next as they will be playing their first home game of the season in the iconic stadium.

The club’s ascent back into Serie A will place it, and its stylish reputation, more firmly in the public gaze than ever before. If it can continue to invigorate the new fans it has already earned, then the sky’s the limit.